The ‘Refuse Not Refuge’ campaign aims to raise awareness of the dangers of sleeping in the large waste containers, which are collected by industrial trucks.

B&M Waste – one of the UK’s largest independent waste management specialists – is writing to businesses urging them to be vigilant, particularly in the winter months, and has issued warning stickers to be placed on its Front End Loaded (FEL) containers across the UK.
As part of the campaign the company is also raising money to support Shelter, the housing and homeless charity.

Mick Ashall, Director at B&M, said the ‘Refuse Not Refuge’ campaign is aiming to make a significant impact on businesses and people who may take shelter in the containers, as well as the company’s own drivers.

“As the FEL containers are large and dry, homeless people see them as an appealing option as shelter against the cold and wet weather. Sadly however, there have been tragic incidents in recent years where people have taken refuge and have been killed when a bin has been emptied.

“This is an industry wide problem that needs to be tackled – whether people are homeless or under the influence of alcohol or drugs, it is vital that customers understand the dangers of people seeking shelter in waste containers of any type. B&M staff undertake a risk assessment before any container is sited.  If the customer or staff feel there may be any risk B&M provide a lockable container.

“FEL containers are commonly used by large commercial and retail businesses. The containers can be sited at the back of premises making it hard to monitor them. However, getting the customer to check the containers regularly or perhaps using CCTV, they can significantly minimise the risk of accidents.

“We have placed deterrent stickers on all our FEL containers and are working hard to educate businesses and our own staff about the issues surrounding the campaign.
“As a responsible company we hope that by getting this message out, we can prevent people from seeking refuge in waste containers and encourage homeless people to seek help from the proper agencies. Working with the Shelter charity will also help to re-enforce the campaign.”

B&M Waste Services is donating a £1 to Shelter for each of its FEL containers in operation across the North West. B&M’s Manchester Depot has also nominated Shelter as its charity of the year.

Mick Ashall said: “We believe there is great synergy between our two organisations and we look forward to supporting the charity over the next 12 months.”

Vanessa Dixon, regional manager at Shelter said: “We’re incredibly grateful to B&M for their donation and to have been chosen as B&M Manchester’s charity of the year.

“Shelter helps three million people a year struggling with housing problems, from landlord disputes and disrepair to risk of eviction and homelessness.  All of the money raised by B&M is vital for us to be able to provide advice and support, so that no-one has to fight homelessness or bad housing on their own.”

For further information on the Refuse Not Refuge campaign, please telephone 0808 100 2434 or emailinfo@bagnallandmorris.com 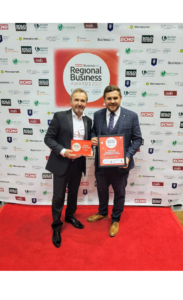