This year marks the 10th anniversary since Wear Red Day was created back in February 2012 by Children’s Heart Surgery Fund.

The fund is our nominated West Yorkshire charity and to celebrate the 10-year milestone, we rolled out the fundraising campaign across the entire company.

Our depots in Cheshire & Merseyside, Birmingham & West Midlands, Greater Manchester and Lancashire joined our Leeds team, wearing everything red and selling cakes and treats to colleagues to raise funds.

The money raised by B&M staff was matched by the Curtis family and will help to strengthen the Leeds Congenital Heart Unit, which is now considered to be a world-class centre of excellence.

Our Leeds team was delighted to meet the Children’s Heart Surgery Fund team at the depot and were proud to show off the specially designed truck which raises awareness of the charity as it travels across the region collecting business waste. 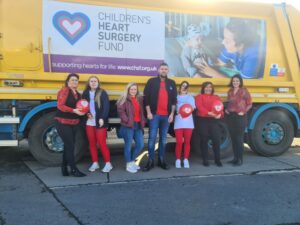